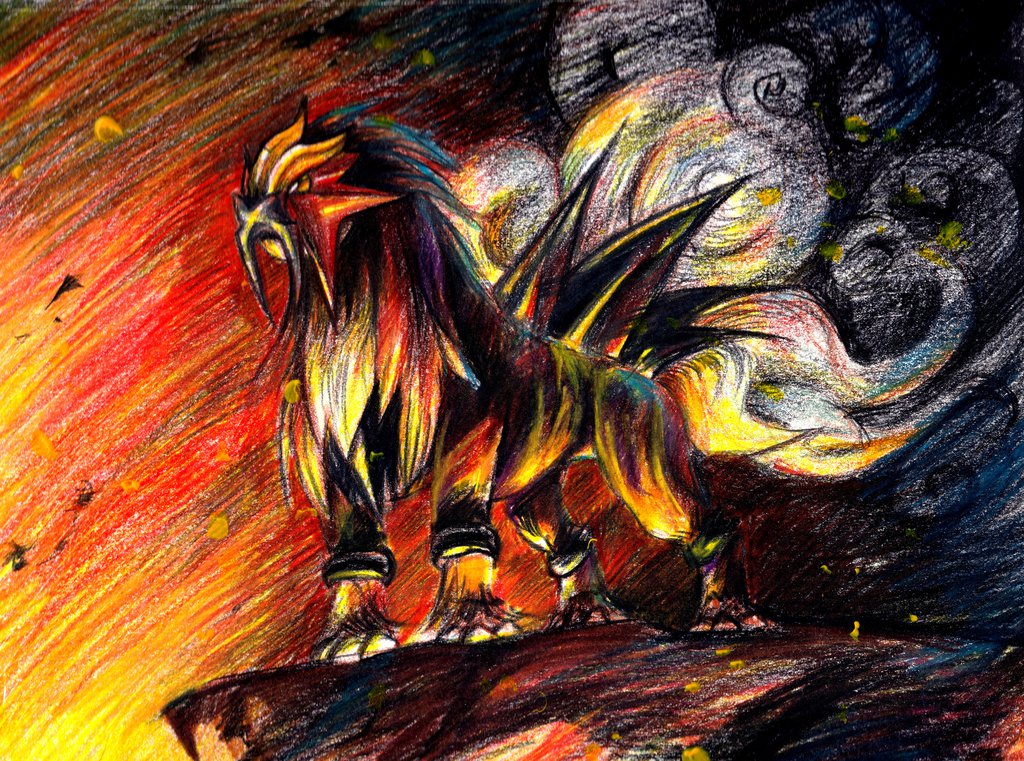 The artwork chosen for our post is very different to most other Pokemon artwork you see online. Most artwork surrounding Pokemon is digitally created as explained on our about page; however, this piece of art is 100% drawn. Using what it seems as various shades of graphite pencils, the artist Riberry has adopted and then applied his own twist to the legendary Pokemon.

Riberry uses his artistic skills to draw and paint Pokemon using the many techniques he has learnt over the years and some of the results are outstanding.

This particular drawing of Entei is very different to the other art on the internet as he has changed some things around. Entei’s thick fur is no longer and is only seen as the main, giving him the look of a lion showing pride. Also, his white cloudy cape is much larger than normal and waves in the wind. Entei blends in with his surroundings as the Pokemon is born from a volcano, they share a connection which is seen in the artwork.

One of the main reasons Entei is my favourite Pokemon is due to its special appearances in the Anime. Unlike our previous post – Rotom Wash – Entei makes an unforgettable appearance in the the third Pokemon movie, “Spell of the Unown: Entei” and a major appearance in the movie, “Zoroark: Master of Illusions” as the shiny version

Entei made appearances also in the anime TV series and other small appearances during four other Pokemon movies. However, after seeing Entei’s first appearance during the Spell of the Unown: Entei, it was made to be my favourite Pokemon. The legendary dog’s voice, its character of loyalty and pride, its design, its roar, its power… the endless reasons to why Entei is so good.

Below is one of the images from the movie’s front displays and it perfectly captures the details of the amazing Pokemon. 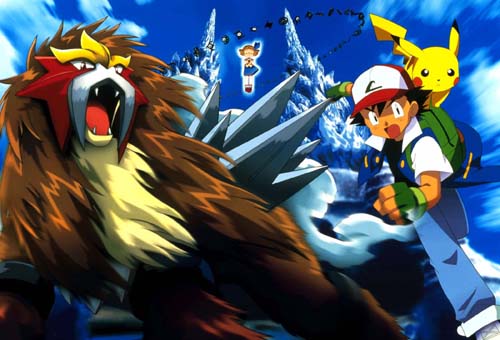 Entei’s strength in the game is also another reason why he is my favourite Pokemon. Entei makes appearances during most of the games. In the early generation games (Generation 2 games), Entei is a roaming legendary Pokemon along with Suicune and Raikou. They are seen to be resurrected by Ho-oh and then jump away to be caught. Other than this, Entei doesn’t make much story within the games itself.

Relating to the later games, Entei can be caught in mirage spots (XY and ORAS games) in the same way as the many other legendaries obtainable in the game that do not specifically relate to the game’s story.

Battling wise, Entei stands out for me as one of “my” best Pokemon which not too many other people use in the same strategy (contact me and I may be persuaded to reveal my secret strategies). However, Entei is commonly an underrated Pokemon in the battling related scenes.

Entei did however make an appearance within the Pokemon VG Masters competition within Naohito Mizobuchi’s. Naohito, from Japan, used Entei in his team to fill the Fire-type role. It knows the signature move of Ho-oh, Sacred Fire. This has a 50% chance to burn while along with dealing a ton of damage at the same time. If you have forgotten or do not know, burn reduces the physical damage of the Pokemon affected by half.

So, you can see why I have been able to use Entei in my best teams and as the top spot for my favourite Pokemon.

Entei, in my eyes has been a highly underrated and not so popular Pokemon. That doesn’t take away the fact that it has some die hard fans like me, but it definitely makes an early spot for this blog due to its design, anime appearances and unique in game capabilities.

Not to forget that the artwork is insane and Riberry deserves another shout out towards his spectacular, traditional artwork.